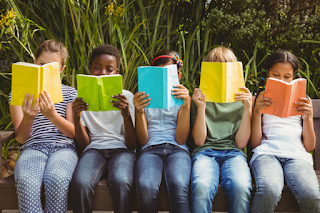 Interview with Elise Godfrey, UGA Board Member and Editor of Crossroads for Kids

Q: Why is there a Crossroads for Kids section in UGA's Crossroads journal?

A: While family history and genealogy research are frequently relegated to older generations, at UGA we understand the joy that can be found in identifying and exploring our family connections and that this can be found at any age! We also recognize that our children will be the ones to carry on the research of our family lines and that inviting them to engage with their family history while in their youth encourages them to continue that tradition. We hope the activities, practices, and stories in Crossroads for Kids will foster a familiarity and love for family history that will continue throughout their lives.

Q: What age range is Crossroads for Kids designed for?

A: The various activities in Crossroads for Kids are geared towards kids and teens age 3-14, but most of them can be adapted to any age!

Q: What types of activities are in Crossroads for Kids?

A: All our activities are meant to educate and inspire an interest in genealogy and family history work! Some activities, like word searches and crossword puzzles, are meant to familiarize children with helpful family history ideas and terminology. Others give children a look into the methodology of family history research and various ways to navigate the branches of our family trees, referencing topics like finding evidence, using record groups, DNA, etc.

Q: How are UGA members benefiting from Crossroads for Kids?

A: Trying to share the nuances and our love of family history can be daunting, particularly when trying to share with children. Crossroads for Kids is designed to deliver easy, actionable, and fun family history ideas and activities to UGA members to share with the children in their lives. Many members use them as quality time activities with their children and grandchildren. Some members use the activities for family reunions or family nights. Regardless of the individual circumstances, members are excited to have quick, accessible ways to introduce the youth in their lives to family history work!

Q: When does Crossroads journal come out?

A: Crossroads is a quarterly journal, with an issue published every Winter, Spring, Summer, and Fall.

Elise Godfrey currently serves as a UGA Board Member and editor of Crossroads for Kids. She graduated from Brigham Young University with a degree in English and Family History. Her areas of professional research primarily focus on New England and Dutch genealogy. As a descendent of avid genealogists herself, Elise is passionate about sharing the joy of family history and genealogy with younger generations. She lives in Boise, Idaho with her husband and three children.

Email ThisBlogThis!Share to TwitterShare to FacebookShare to Pinterest
Labels: Education

The UGA Summit of Excellence has officially opened for registration. This exciting conference, held virtually September 15-18, 2021, is a four-day event with multiple tracks that offers a premier educational opportunity. Each track features a different record set or research area such as legal records, methodology, technology, or DNA.

Let's take a deep dive into one of these exciting tracks: military records. Military records are an exciting area of genealogy rich in both vital data and enriching stories. From draft and service records to pension and land, the types of records available from our military are vast and varied. It is hard to know what you will find in these amazing documents.

Because military records can be such a rich and important tool for a genealogist, it is exciting to be able to listen to these engaging experts. 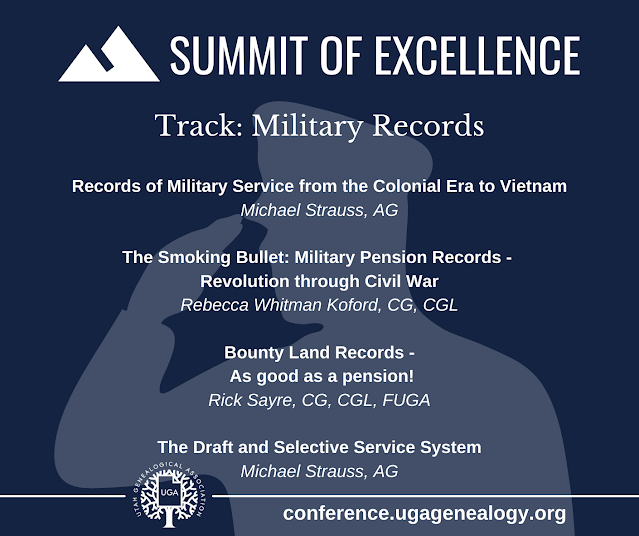 Here is even more detail on each of these classes:

Records of Military Service from the Colonial Era to Vietnam with Michael Strauss, AG

Vital to any military ancestor is their service records, which define when an individual was mustered in and out of service. This lecture examines records from the colonial era to Vietnam.

Michael L. Strauss, AG®, is a professional Accredited Genealogist® and a nationally recognized speaker. A native of Pennsylvania and a resident of Utah, he has been employed as a Forensic Investigator for nearly 30 years. Strauss has a BA in History and is a United States Coast Guard veteran. He is a qualified expert witness in the courts in New York, New Jersey, Pennsylvania, and Virginia and is a faculty member at SLIG, GRIP, and IGHR where he is the Military Course Coordinator. Additionally, he is involved with both Civil War and Mexican War reenacting for more than 25 years.

The term "smoking gun" is a metaphor for an object that serves as conclusive evidence. Rarely in genealogy do we find a single document or file that lists an ancestor's birth, marriage, and death, but that is exactly what we may find in military pension records. This lecture will discuss how to dissect and understand pension records in their historical context, compared to pension laws, and the conflicts they served, pension records served to identify whole families and even communities in many instances.

Rebecca Whitman Koford holds credentials as a Certified Genealogist® and as a Certified Genealogical Lecturer. Her focuses are Maryland and military records at the National Archives, especially those of the War of 1812. Rebecca has been taking clients and lecturing since 2004. She has spoken for the National Genealogical Society Conference (NGS), Federation of Genealogical Societies Conference (FGS), Association of Professional Genealogists Conference (APG), RootsTech, webinars for Legacy and APG, and the Maryland State Archives. She has published articles in the NGS Magazine, APG Magazine, SAR Magazine, and the Maryland Genealogical Society Journal. Rebecca is also the Course I coordinator for The Institute of Genealogical and Historical Research (IGHR) and has been an instructor at the Genealogical Research Institute of Pittsburg (GRIP) and the Salt Lake Institute of Genealogy (SLIG). She is a graduate and former mentor of the ProGen Study Group, an online peer-led study program based on the book Professional Genealogy by Elizabeth Shown Mills; and served as the ProGen Administrator from 2015–2020. Rebecca currently works as Executive Director of the Board for Certification of Genealogists® and as Director of the Genealogical Institute on Federal Records (Gen-Fed) held annually at the National Archives in Washington, D.C.

Bounty lands were awarded by the federal government from 1788 to 1855 to encourage and reward service in the military. Nine individual states (Connecticut, Georgia, Maryland, Massachusetts, New York, North Carolina, Pennsylvania, South Caroline, and Virginia) also award land as part of Revolutionary War compensation, Eligibility for military bounty lands varied by the criteria in the authorizing legislative act. The award of bounty lands did, in fact, motivate some veterans to move west. The effect was considerably diluted because many individuals sold or assigned their bounty land warrants. often these warrants were purchased by land speculators. Regardless, the applications for bounty land are often as available as pensions as it relates to funding kinship information. Also, Many more veterans were eligible for bounty land benefits as opposed to pensions. The presentation will cover the application process, the location of records, and the best way to access the records. the expected kinship information will be identified. Also, related records such as the land entry file will be described.

Rick Sayre, CG, CGL, FUGA, a retired colonel who served 31 years in the U.S. Army, is a long-time researcher and instructor in genealogical topics. Rick is the current secretary and immediate past president of BCG. He coordinates the Advanced Land course and the Using Maps in Genealogy course offered by the Salt Lake Institute of Genealogy (SLIG), and he instructs in several other courses at SLIG. Rick co-coordinates with Judy Russell, JD, CG, CGL, the Law School for Genealogists course at Genealogical Research Institute of Pittsburgh (GRIP) and the Family History Law Library course at SLIG. He also lectures at national conferences and presents nationwide seminars. His areas of expertise encompass records of the National Archives, the Bureau of Land Management, and the Daughters of the American Revolution, including military records, land records, using maps in genealogy, urban research, and government documents. Rick specializes in the localities of western Pennsylvania and Ohio.

The Draft and Selective Service System with Michael Strauss, AG

Draft records are invaluable to genealogists as they provide documentary evidence of men of eligible military age who served during periods of war. These records also account for men required to fill out the registration forms, but who might not have been mustered into service. The first national conscription passed by Congress was in 1863. Since then, congressional legislation through the passage of several Selective Service Acts in 1917, 1940, 1948, and 1967 have accounted for men who would have served between the Civil War and the Vietnam War. Also, the class will examine the draft that affected the Confederates during the Civil War between 1862-1865.

UGA Summit of Excellence to Open for Registration on April 24

The time to register for the UGA Summit of Excellence is finally here! Registration will begin on Saturday, April 24, 2021, at 12:00 pm MDT. The Summit will be a full-fledged virtual conference featuring 55+ speakers over 4 days, a keynote by D. Joshua Taylor, and an event to commemorate the 50th anniversary of the founding of the Utah Genealogical Association. The conference will take place September 15-18, 2021, and take place via Zoom.

The conference will have a number of special features including a free "Getting Started" day and attendees will be able to watch recordings of additional sessions for several months after the conference. For more details on the conference features and benefits please read out last blog post here. 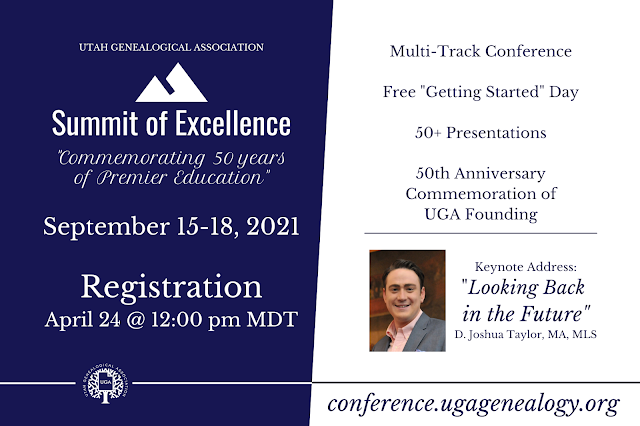 The Utah Genealogical Association is excited to be hosting this great educational event. Here is the cost to attend the conference:

You can learn more about the conference, see the full speaker schedule, set up a registration account, or register at conference.ugagenealogy.org.
at April 23, 2021

Email ThisBlogThis!Share to TwitterShare to FacebookShare to Pinterest
Labels: Summit of Excellence

Celebrate UGA's 50th Anniversary at the Summit of Excellence

The Summit of Excellence, UGA's annual virtual conference, will look different this year, and for good reason. In September 2021, the Utah Genealogical Association is set to turn 50 and this year's conference is aimed at celebrating all those years of providing premier genealogical education. As we engage in this event, participants should look forward to a number of new and exciting event features.

UGA will host a free single-track day on September 15. The opening day, called our "Getting Started Day" will feature a full day of renowned speakers addressing topics for the introductory genealogist. Topics will include gathering family information, introductions to record types, beginning research methods, locality surveys, and tools for online research. 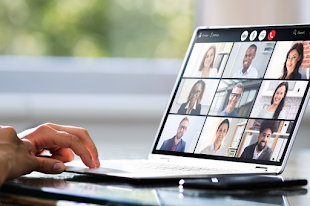 Attendees to the 2021 Summit will enjoy a full conference experience of 57 presentations on a wide range of topics given over the four-day event from September 15-18, 2021. Featured tracks each day will help participants find topics of interest to them.

One of the great advantages of hosting a virtual conference is the ability to still attend sessions you miss, all thanks to the digital recordings. Attendees will have access to session recordings until December 31, 2021 to continue to learn and watch as frequently as desired. 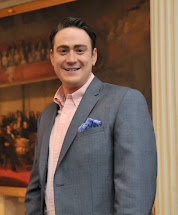 The conference also features an engaging keynote about the past and future of genealogy, "Looking Back in the Future," given by D. Joshua Taylor, MA, MLS, former board member and historian of the Utah Genealogical Association and current president of the New York Genealogical and Biographical Society.

The final event of the conference will commemorate 50 years of the Utah Genealogical Association, with opportunities to celebrate our shared memories, experiences, and paths in garnering premier genealogical education.