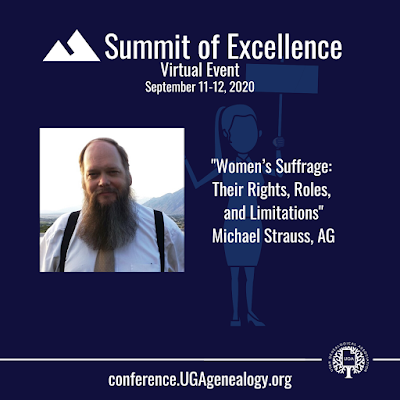 The women's suffrage movement was a long and hard won battle to win the right to vote by women in the United States. The hard won effort took activists and reformers decades to achieve and the struggle nearly disbanded the movement more than once. Despite the difficulty on August 18, 1920, the 19th Amendment was ratified, empowering all American women to vote and declaring for the first time that they, like men, deserve all the rights and responsibilities of American citizenship.

To honor that struggle, the UGA Summit of Excellence will feature a keynote celebrating this movement and moment in history. "Women's Suffrage: Their Rights, Roles, and Limitations" will be presented on Saturday, September 12th at 9:00 am MDT by Michael Strauss, AG.

We are honored to invite Michael to speak on this subject and to celebrate this moment in history. The lecture focuses on the history of women and the Suffrage Movement from the colonial time to the middle of the twentieth century. Numerous genealogical records are examined in this lecture from the Anti-Slavery movement, to the Temperance Movement, military service, and later as woman gained the right to vote.

Michael L. Strauss, AG, is a professional Accredited Genealogist and a nationally recognized genealogical speaker. A native on Pennsylvania and a resident of Utah, he has been employed as a Forensic Genealogist for more than 25 years. Strauss has a BA in History and is a United States Coast Guard veteran. He is also a qualifies witness in court in New York, New Jersey, Pennsylvania, and Virginia. Strauss is an approved genealogist with the United States Army to locate DNA qualifies persons MIA from Korea, Vietnam, and World War II. Michael was the film historian for the 2014 film "Finding Vivian Maier" which was nominated for an Oscar for Documentaries in 2015. He has been involved in Civil War reenacting for more than 25 years, serving in two units, namely; the 99th New York Infantry and Battery A., 5th U.S. Artillery and most recently the Utah Living History Association.

The UGA Summit of Excellence is a virtual event that will be held September 11-12, 2020. To register or lean more please visit conference.UGAgenealogy.org.
at July 22, 2020

Salt Lake Institute of Genealogy Blog Page Has Been Moved

The Salt Lake Institute of Genealogy (SLIG) blog page has been moved! Please update your bookmarks. SLIG's blog can be found at http://saltlakeinstitute.blogspot.com.

https://ugagenealogy.blogspot.com will now be used for the Utah Genealogical Association blog. We hope you will follow this blog as well!
at July 08, 2020